Ever since the Snowden leaks, people are increasingly becoming aware of the importance of their data. They refuse to continue using mainstream internet services that exploit personal data for advertisements and maximizing profit. 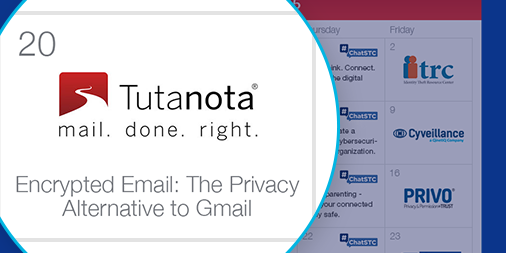 The amount of information big companies have on us by now is frightening, and it gets more with every click. This allows companies to place targeted ads, possibly even at a higher price, because they know exactly what we want. Only slowly are we realizing that it doesn’t necessarily benefit us to use ‘free’ services that focus on mining our data.

Your likes. Your friends. Your ways. Your dreams. Your hopes. Your thoughts. Your secrets. Your life. It’s all in your data… and they own it

Think about that for a moment.

Fortunately, easy-to-use tools exist that protect our personal data. The encrypted email service Tutanota is one of the few that takes your privacy seriously. While it does offer a free version – because we at Tutanota believe everybody has the right to privacy – it is financed by donations and by offering Premium features, not by placing ads. In Tutanota, all data is encrypted so data mining is simply impossible.

The entire mailbox is automatically encrypted

Tutanota is a secure email service built by German engineers that automatically encrypts your entire mailbox. No third party – not even we, the developers of Tutanota – can read or scan your emails. Tutanota also lets you share end-to-end encrypted emails with anybody easily. The simple sign up only asks for a user name and a password, no existing email address or phone number is required. You can access your encrypted mailbox easily in any browser or in the Tutanota Android or iOS apps. Upon login your encrypted data is decrypted locally so that only you can read it.

On top of this, you can easily send end-to-end encrypted emails to any recipient in the world. These messages do not travel the internet like normal emails. They are always exchanged between the user and the Tutanota servers directly, thus making them invisible to organizations monitoring the internet. Recipients outside Tutanota access their messages via a notification email and can reply with an encrypted message without having to sign up. Of course you can also send and receive normal emails just like with any other provider.

More than one third of Tutanota emails are already encrypted

“We have built Tutanota to make encryption a standard that everybody uses simply because it is there, not a feature you have to turn on when needed,” says Arne Möhle, co-founder and developer of Tutanota. “We want encryption to become mainstream. Today every country, every big company, every hacker can monitor the entire email traffic with a few clicks because it is not end-to-end encrypted. We want to stop this. We believe that privacy is a fundamental right of every citizen of the world and that mass surveillance needs to stop immediately. Unfortunately, we also understand that monitoring your every move on the web is just too easy, so there will always be someone trying to spy on your data. This is why we promote encryption. It is a great tool to lock out all the spies.”

About 37% of all emails sent from Tutanota are already end-to-end encrypted. This is a great success because similar figures have never been reached by standards such as PGP (Pretty Good Privacy – an early data encryption method created by Phil Zimmermann in 1991). One of the reasons is that Tutanota makes encryption so easy that people don’t even notice that they are communicating securely now.

“We are very happy that the percentage of end-to-end encrypted emails is rising so quickly. This makes our online communication as a whole much more secure. Mass surveillance is an illegal intrusion on everybody’s right to privacy. If Secret Services refuse to change their habits, we have to change ours by encrypting every email”, concludes Möhle.

Try Tutanota now so that your emails stay private! Sign-up takes only seconds.

Arne Möhle: Arne is co-founder and developer of Tutanota. He fights for privacy because that’s the cornerstone of freedom and democracy.