Multi-tasking. Most of us think that we’re really good at it. A high level of confidence in our own ability to do several things at once seems to overcome us when we start walking and chewing gum at the same time. (“Pay attention to what you’re doing, Johnny!”) From then on, the sky is the limit as we strive to split our concentration onto as many simultaneous activities as possible. 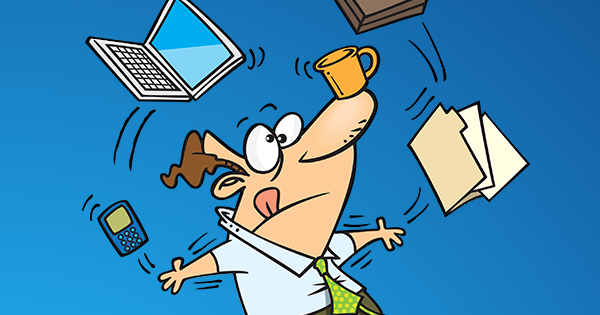 It’s as if, suddenly, we become invincible: we love the idea of saving time while still giving each activity the right level of attention. At least that’s what we think we’re doing. Reality is a little different…

Here’s a recent headline that caught my attention:

“We ignore computer security alerts up to 90% of the time, study says”

What’s up with that?

Well, a team from Brigham Young University and the University of Pittsburgh have published a study titled “More Harm Than Good? How Messages That Interrupt Can Make Us Vulnerable.” As explained in the Abstract, while previous studies have shown the effect of interruptions on stuff we are working on, the new study flipped this by looking at the impact of dual-task interference (DTI) on the interrupting task (the culprit).

Having just learned what DTI is, I am pleased to share it with you: “dual-task interference (DTI) – a cognitive limitation in which even simple tasks cannot be simultaneously performed without significant performance loss.”

The team used cool technology like magnetic resonance imaging (MRI) to show what DTI looks like in our heads.

Even though the alerts are appropriate and context sensitive, they were shown to increase stress and decrease productivity. The study concludes that this is the reason that people ignore software security warnings most of the time.

Think about that for a moment. There you are, doing something as ‘simple’ (i.e. not mentally taxing) as watching a video or catching up on last night’s sports scores and up pops a message: [new security updates available]. Instead of multi-tasking or even just shifting our attention for a moment, the great majority of participants disregarded the incoming message. (What would Cheetah – Tarzan’s chimpanzee – do in that situation?)

Now, let’s shift this ever so slightly to a situation we’re all familiar with: what happens when you’re prompted to create a new password on a website. There you are surfing the internet, just minding your own business, when a new site prompts you to login in order to get that additional piece of info, or to place an order. If a message like [install security updates] is a major DTI episode, just think what happens in our brains when we’re suddenly prompted to create a password.

In the one instance, you basically have to click to initiate the process.

With passwords, we’re asked to

Wow – our brains must be lighting up like fireworks!

It’s no wonder so many people are defaulting to the simplest password they can get away with. It’s sort of the digital equivalent of the fight or flight response: faced with having to enter a password to enter the site (fight), or not being able to move on to the next step (flight), we default to the solution that is least painful to us at that moment. That’s why so many primates have 123456789 as their password.

Interestingly, the study concludes by noting that DTI – and therefore the urge to ignore the interrupting  task – can be reduced by timing the task between primary tasks. In other words, eliminate multi-tasking cognitive conflict by eliminating multitasking. It turns out that we’re not that good at multitasking, after all.

That’s why a password manager is your best choice for creating and storing long and strong passwords for each of your accounts. It’s the least distracting, while still keeping you in charge.