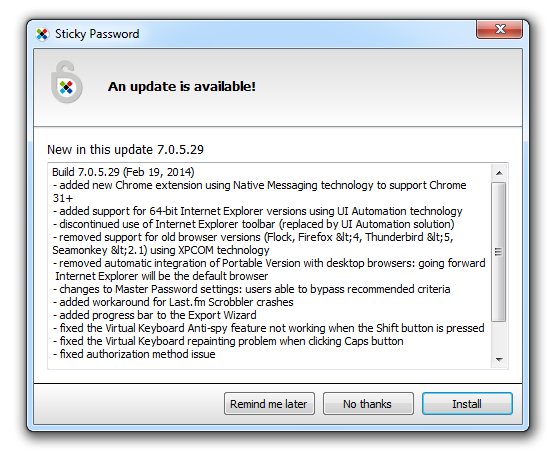 The new release of Sticky Password has been released today, and we wanted to let you know about the new functionality you’ll enjoy with it. In addition to various fixes and minor cleanups, Sticky Password 7.0.5 includes several improvements for better browser interaction.

The new release supports the new Native Messaging API that was rolled out by Google in Chrome 29. As a result, Sticky Password will able to seamlessly support future releases of Chrome as well as older versions.

Sticky Password 7.0.5 incorporates support of UI Automation. Microsoft UI Automation is a technology that provides programmatic access to most UI elements on the desktop. It enables assistive technology products, such as screen readers, to provide information about the UI to end users and to manipulate the UI by means other than standard input.* UI Automation allows Sticky Password to interact with the 64-bit versions Internet Explorer 10 and 11 without requiring toolbar modifications, which means that no plugin will be required.

Users of older versions of several browsers should note that the new release of Sticky Password will no longer support XPCOM. This will impact only the few Sticky Password customers using old versions of the following browsers (under the Mozilla umbrella, or based on the Firefox browser):

For security and support purposes, if you are using old versions of these browsers, we strongly recommend that you upgrade to the current version offered by the respective vendor.