In what is being billed as a free speech case, a girl from Minnesota wins a $70,000 settlement over her treatment at the hands of school administrators who made her tell them her Facebook password.

Let’s take a look at what happened:

A 6th grader writes on her facebook page that she ‘hates’ a school hall monitor and school ‘officials’ (since when do they call the principal, vice-principal and secretaries ‘officials’?) bring her into a room (is that the principal’s office, or is that some sort of special detainment area with bars and a guard outside?) where, ‘with a police officer present’ the forced her to tell them her password.

A little heavy handed. Ya think?

What would the penalty have been if the hall monitor had overheard the girl uttering the terrible words that shall not be spoken? Flogging?

For all their officialness, school administrators these days have no commonsense, and no clue of what a suitable response is to a typical statement by a 13 year old. After all, don’t 13 year olds hate just about everything?

Superintendent Schmidt said that “[t]he school’s intent wasn’t to be mean or bully this student, but to really remedy someone getting off track a little.” 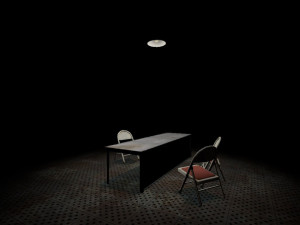 We’ll remind our readers that the school called in the police to have a 13 year old girl reveal a password. If the presence of a police officer in a detainment room without your parents isn’t intimidating and bullying to a 13 year old, then it’s hard to imagine what is.

The school already knew what the student had posted on Facebook when they went after her password, so why the interrogation?

We get it, the school ‘officials’ were simply covering their collective butt with a knee-jerk reaction of their interpretation of what the school policy was. A significant reason for overreactions of this sort by public administrators is to cover their butts. The policy is: no one loses their job by overreacting to any rule. It’s really a no brainer: CYA! CYA! CYA!

On a positive note, the school district must implement a new policy for electronic devices. ‘The new rules say electronic records and password created off campus can only be searched if there’s a reasonable suspicion they will uncover violations of school rules.’

For our taste, that’s too open ended and leaves lots of room for abuse, but it’s a start.