Check out this epic video!

You won’t believe what happened next! 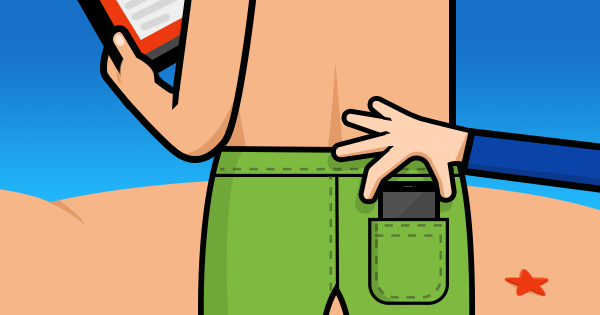 Even without these triggers, most of us are constantly checking our digital device(s) to make sure we’re not missing anything. It’s become a reflex. We’ve gotten used to interrupting whatever we’re doing – even our own thoughts – in the hopes that something somewhere is more exciting than what we are doing at the moment.

The theme for the Twitter chat #ChatSTC (3pm EDT on July 14) hosted by @StaySafeOnline (StaySafeOnline.org) and their @StopThnkConnect campaign is about ‘unplugging’ and staying safe online while on vacation. A big part of the issue is about security (loss or theft of data or a physical device) and privacy (revealing more than we should or realize), but significantly, it’s just as much about distracting ourselves with our smart- and even our not-so-smart devices.

Distractions in the middle of diversions

I played golf last week. I hadn’t played in a couple of years, so I was a little nervous about how many golf balls I’d lose in the woods. Things were going surprisingly well when suddenly (no, I didn’t hit someone with a stray drive off the tee) one of the guys in our foursome took out his smart phone ON THE GREEN and started swiping away. The rest of us looked at each with wondering expressions. What was it that had just happened that Joe would allow it to distract him from his upcoming putt?

As we were walking to the next tee, I asked Joe if everything was OK. He looked at me with a puzzled look before he figured out what I was talking about.

So it was a self-inflicted distraction. Hmm…

He was actively participating in an activity that he really likes (albeit ‘just’ a game), but it wasn’t interesting/engaging/entertaining enough to hold his attention even for a few hours. Sure, golf does have lots of moments between shots when it sort of looks like nothing is happening (golf is ‘played in the six inches between the ears’, so the appearance that ‘nothing’ is happening is deceiving), but checking your smartphone ON THE GREEN (which is where the action is) is like being at a nice restaurant and checking the scores from last week’s games right after your dinner is brought to the table.

Why would anyone do that?

I know, I know, it’s all subjective. What’s fascinating to one person isn’t at all interesting for someone else. Call me old fashioned, but there is something to being ‘in the moment.’

Driving our children to digital distraction

All too often as parents, we are the creators and then the enablers of our children’s dependence on devices. Beginning when they are still tiny tots, we give them our phones to keep them from being bored, or to stop them from crying, or to distract them from the candy in the checkout aisle, or ______________________ (fill in your reason).

How often have you seen parents give an iPhone to a child in a store or restaurant to quiet their child? When was the last time you rode in a car with a child in the back seat of a car without a video being on for the child to stare at? We’re giving our children devices to pacify them even before they can talk and then we’re surprised that that has become the norm for them.

Just as bad, our kids see us constantly viewing/responding/reading something on one device or another. And then we’re surprised that our children do what they observe us doing. We’re shocked when we notice that they are staring at YouTube, or posting more selfies on Instagram, or texting with Suzie or Bobby, or…

Why should they put the device down even for a little while, when we ourselves don’t? Expecting children to do as we say, not as we do usually ends up badly on both sides.

“And as I hung up the phone it occurred to me, he’d grown up just like me.
My boy was just like me.” Cat’s in the Cradle by Harry Chapin

We’re showing our kids that that’s the way things are. They’re following our lead, but we can’t see it because our noses are buried in our phones.

While there is more time to ‘fill’ when you’re on vacation (the kids are off from school and you get some time off from work), ideally there really shouldn’t be a difference between your children’s relationship to their devices during the school year and during vacation time. While they may spend some more time on the devices in the summer, it’s still necessary that there are rules (set by the adults – i.e. YOU) and that the rules are followed.

Make sure that the expectations are set on both sides: for parents and children.

If you and your child have gotten used to the iPhone being the tool-of-choice to give yourself a few minutes (or hours) of peace when it’s convenient to you, why would you expect your children to behave differently during the summer or on the few occasions you happen to be paying attention?

Make it clear that devices are a pleasant distraction for limited periods of time during the day – and should not take up the bulk of the child’s waking time.

The sooner you begin weening your child and yourself off of your digital pacifiers, the better.

This summer, try #unplugging to minimize your family’s digital distractions. Have a great summer!

If you missed the live chat (July 14, 2016), then for more info on digital distraction, privacy and online security, please check out the lively transcript and see what @StickyPassword (stickypassword.com) and an all-star cast of security experts were up to. 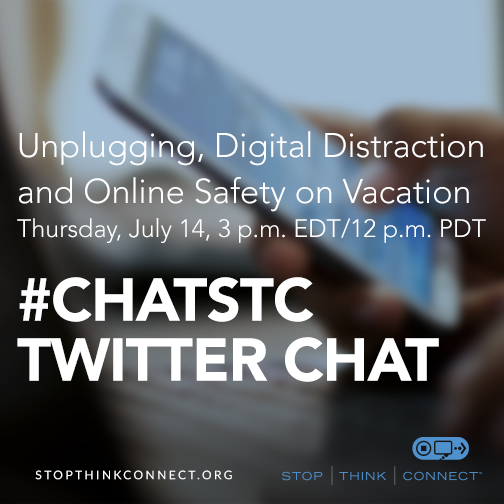