My dad got scammed and how you can protect yourself

As part of the Sticky Password Real Adventures in Internet Security Giveaway during National Internet Safety Month, I decided to share an experience that happened to my own family. By raising awareness of email scams, I hope that you’ll be able to recognize them and to avoid the risk to yourselves!

A couple of years ago, my dad received an email from a former work colleague that he hadn’t heard from in over 15 years. They had never been close friends. In the email, the colleague said that he was stuck in Scotland, and that he needed money right away for a hotel room that night plus a train ticket to get home. 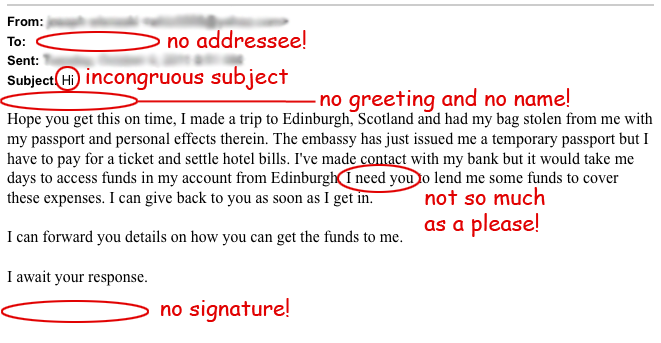 Fully believing the story of distress, my dad replied to the email: “where should I send money?”

The immediate response gave a Western Union address in Scotland. It didn’t even occur to my father that anything could be wrong – like why, if it was such an emergency, the address to send money wasn’t included in the initial email. All he could think about was that someone he knew was in trouble, and that he had to help.

My dad wired $150 and then replied to with an email saying that he had sent the money. Within minutes, he received another email asking for more money.

Possibly because he was beginning to suspect something was wrong, my dad actually apologized, saying that he couldn’t send any more. He needed to reject still another request for more money before the attack was finished.

All of this happened in just half a day. By early afternoon, it was all over.

It was a scam. It wasn’t the former colleague who had sent the email, but a conman, who probably sent the same email to hundreds or thousands of addresses that were in the stolen address books of victims of malware of one sort or another.

Is your family at risk?

Bad guys work hard to gain their victim’s trust in order to take advantage of him or her. They are professionals at stealing money! Because of the unprecedented possibilities of ‘scaling’ to a worldwide audience, the Internet is the place to be for bad guys and conmen. Simply clicking ‘send’ gets their message to thousands, if not millions of people in seconds. Then they wait.

The Internet involves an element of anonymity that makes us think we are protected from whoever is on the other end. Because of this, we tend to let our guard down and our trust level increases, because “look, it’s an email for me!”

How can you protect yourself and the ones you love?

Following are some email basics to protect yourself and your loved ones:

In addition to making sure that everyone in your family has basic security components like anti-virus, anti-malware, a firewall and a password manager and other security programs, and make sure everyone knows how to use them!

Also, Snopes.com is a great resource for finding out about scams! It’s one of my favorite websites that I check whenever I come across anything suspicious. You can also do a simple google search on any term in a suspicious email to see if someone else has already flagged it as a scam.

I encourage you to help senior adults in your family know that they don’t have to go it alone. Let your loved ones know that you are there to help them and to answer their questions. The Identity Theft Resource Center does a nice job calling attention to this important issue.

I sat down with my father and reviewed the series of emails he received from the conman in Scotland. We talked about what happened to show him the clues that should have tipped him off that it was a scam. There were several points that just wouldn’t make sense if they had happened in-person, but because this was an email, my father discounted his doubts and tried to act quickly.

Most importantly, I let my father know that he can reach out any time to ask any question he has about emails or things he doesn’t understand on the Internet.

Send your real life story to [email protected]. Each week, we’ll choose the best entries to highlight best practices that people just like you can use at home. Throughout the month, we’ll post our favorites in our blog, on Facebook and on Twitter.

The 10 best entries during the month will receive a super security bundle worth more than $330 from our partners that includes a VPN, anti-virus, online backup, anti-keylogger, parental control, PC optimizer, encryption software and, of course, Sticky Password. That’s a great foundation for your personal online security!