It’s National Internet Safety Month, and we’re announcing the weekly winners of the Real Adventures in Internet Security Bundle Giveaway Event. A big ‘Thank You!’ to everyone who submitted an entry. Read on to check out the stories from this week’s winners.

Submit your entry to [email protected] during June for your chance to receive one of 10 super security bundles that includes a VPN, anti-virus, online backup, anti-keylogger, parental control app, PC optimizer, encryption software and, of course, Sticky Password.

Top learning moments of the week

Heidi told us about an experience that we think many of us have also experienced – but, hopefully were able to cut off before it got this far. Her daughter received a phone call that could have led to many bad things happening. We’ll let Heidi tell the story:

My story involves my teen daughter who is high functioning autistic.  She loves the internet as she can “be herself” she says, and plays many games, posts her artwork and watches video. One day, while I was working, I got a message from her saying that when I got home I would need to pay the Windows people as she had no money- ???? was my response.

She had answered the phone, it was someone saying they were from Windows: “your computer is infected and could you go sign on”– which she did.

It seems these people had even tried to get money from her through Western Union.

First, I told her do not go on your laptop for anything, we will take it in to be cleared.

Then we called Western Union. She closed the account the bad people had made.

I then called the bank as both my daughter and I have accounts there. Nothing had touched them but I did put an alert on our accounts – drove me crazy for a couple months but also gave me some peace of mind.

Next we called the police and their fraud squad to report this and were very lucky to get an officer who himself had an autistic child and understood my concern.

When I asked my daughter why she did what the people on the phone said she told me because they sounded legitimate.

We have had many long chats now about online safety, phone safety, etc.  And the Windows people still call the house- but, if either of my kids answer the phone, they get quite an earful and hung up on.

It is very scary when it happens as you think how easy it would be to create an identity of a teenager once you have their bank information, facebook info, all the pictures etc. I still check now online for things that may say it’s her and isn’t, I guess I always will.

I only hope that schools and parents understand just how easy it is to be sucked into this scam.

Talk, talk, talk to your kids.

Zach shared some of the great tips he has used when helping resolve “hundreds (maybe thousands) of computer problems for friends, family, and a host of clients. What can absolutely help is learning and following a set of behaviors with your PC, and knowing what a scam looks like.” Here’s the short list of favorite pieces of advice from Zach:

This is a great starting point. We all have questions at some time or other, so knowing that you have someone to turn to is very helpful. Also, stay informed and make sure you know the basics of the devices and software you are using. This applies to all your security software: know what is it that you have to do, so that it can do what it’s supposed to do? (That’s clear – right!? J ) This doesn’t mean that you should become an expert at VPNs, for example, but you should know how to react when your VPN gives you a popup warning.

You can’t protect yourself from everything, but a little forethought and protective action up front is more effective – and a lot cheaper – than trying to fix things after an attack: like recovering data after a hack or crash, removing a virus, or stopping someone from spreading personal info about you.

Advertisers routinely make ads that look like Windows dialog boxes, and many users click on these thinking they’re responding to a problem. What they end up with is software that doesn’t do much except scare them into paying for it.

Thanks for the great advice, Zach!

The most original entry of the week was from an anonymous friend who sent us a password-themed rhyming poem inspired by the list of worst passwords of 2014. Here are a few of our favorite bits from the poem:

And I realized, that hackers were looking at me

I said to myself, with one huge screech

dragon I would get jump off of that bad password wagon

Thank you, Heidi and Zach, and anonymous friend. We hope you get the most out of your security bundles!

Send your security experience to [email protected] and help others by anonymously sharing your experiences and learning moments, and you may receive one of 10 super security bundles valued at over $330. 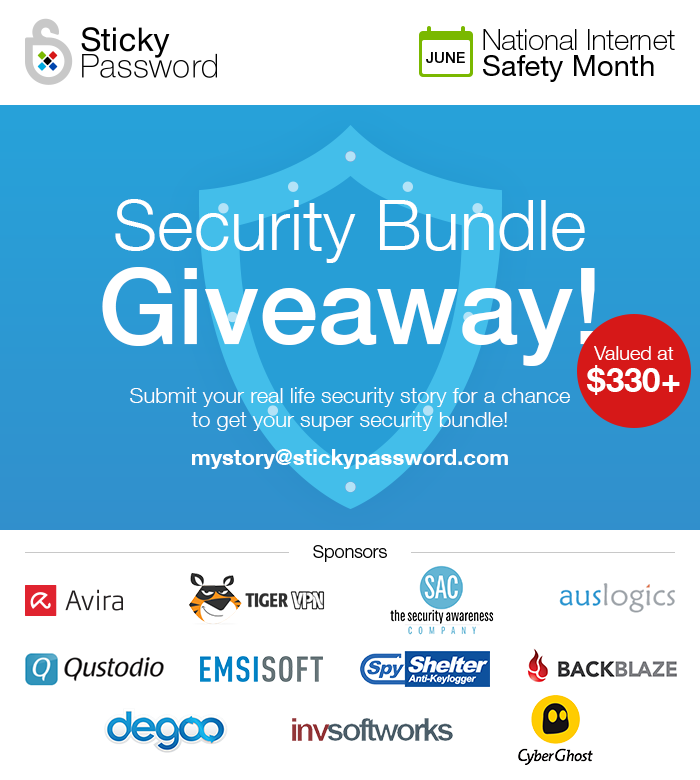 *All quotes and personal mentions made with the permission of each individual referenced herein.